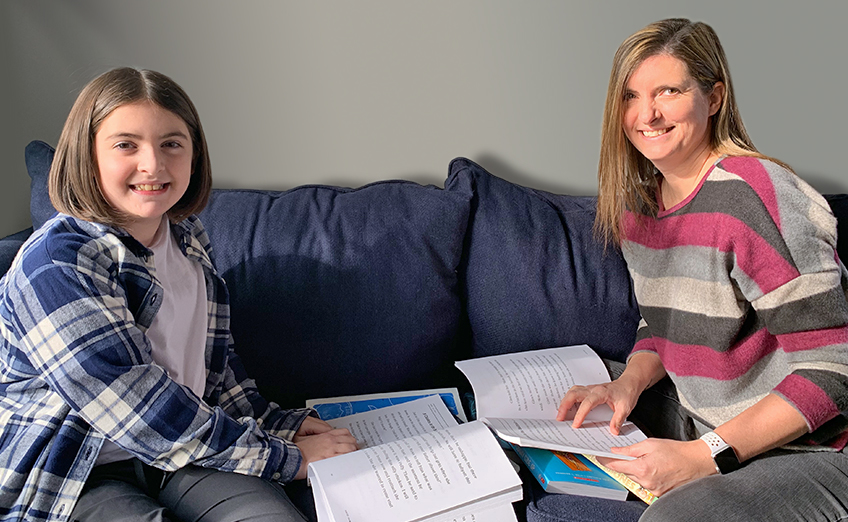 Research shows that the sooner children with dyslexia or other reading difficulties receive effective intervention, the more receptive their growing brains will be to mastering the complex rules of written language. Moreover, early intervention may avert years of frustration before a cycle of reading failure and low self-esteem sets in.

This rings true with Anna C., a Massachusetts fifth grader who was formally diagnosed with dyslexia at the end of first grade and has grown up with an optimistic attitude toward her neurodiversity. This positive outlook is inspired by her family’s approach to addressing it, knowledgeable educators, and explicit, structured literacy instruction through the Wilson Reading System® (WRS), which is provided at her public school.

“I completed my practicum just days before giving birth to Anna,” shared Kelli, who teaches WRS to students diagnosed with dyslexia in a suburban public school district near Boston. “I always found it ironic that she was then diagnosed with dyslexia at the end of first grade. While she started Wilson in second grade, it should be noted that her first exposure to Wilson was clearly in utero!”

After noticing their daughter’s learning difficulties in kindergarten and first grade, as well as Anna’s keen ability to memorize stories, her parents sought out a formal diagnosis from a neuropsychiatrist. In addition to dyslexia, Anna was diagnosed with attention-deficit/hyperactivity disorder (ADHD) and dyscalculia – difficulty with math.

Breaking the news to their daughter wasn’t difficult for Kelli and Derek, Kelli explained, although the presentation was thoughtfully planned.

“We told her, ‘We’ve got good news! You have something called dyslexia, which means that your brain learns differently. The reason it’s good news is because now we know why reading and spelling are so hard for you, and even better, we now know exactly what type of instruction you need to learn.’ We also told her that because her brain works differently, she would also excel in different areas, like being creative. So as she has continued through school, she has had many opportunities to share her creativity, and we always tie that to dyslexia. We want her to know that having this diagnosis isn’t just about what’s hard, but that it’s also something that should be celebrated. We never wanted her to be ashamed of it, and she’s not.”

During Dyslexia Awareness Month in 2019, Anna shared her story with older students during an assembly, which helped many with similar struggles accept and understand their own learning differences.

“Dyslexia isn’t who you are. It’s what you have,” the 10-year-old said, demonstrating her optimism.

Adds Kelli, a member of the Massachusetts branch of the International Dyslexia Association (IDA), “I have been watching her progress through the program and I am amazed at how far she has come. While I am incredibly proud of her as a mom, it was equally moving to watch my WRS students go up to her and say that they also have dyslexia. Some of them had never spoken about it out loud at school. Now it is something they share with more confidence. Wilson also helps with that. I’ve had the pleasure of watching many students grow in their decoding and encoding skills. I am grateful for what Wilson has done for my students, and my own family.”