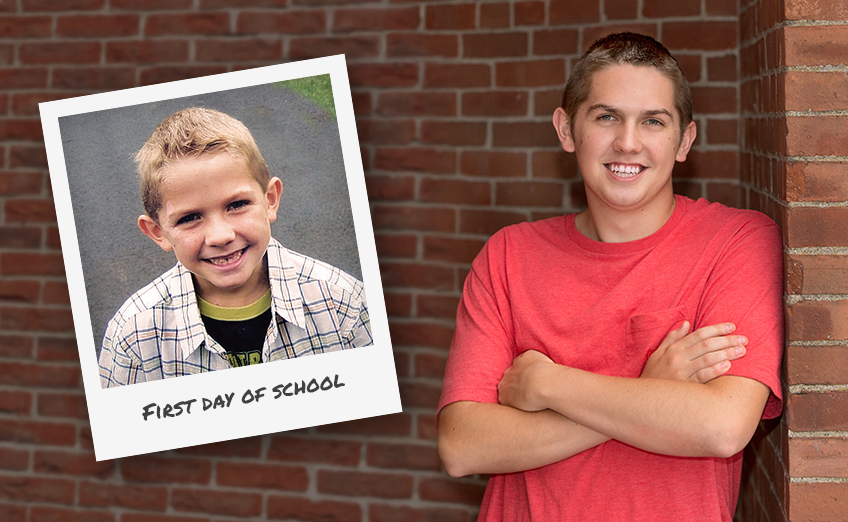 More than a decade ago, long before the word “dyslexia” was widely used, Deanna Fogarty realized the toll the language-based learning disability was taking on her otherwise bright  young son, Billy Nadeau.

An elementary school teacher at the time, Deanna joined countless parents and caregivers on the challenging journey of guiding a child with dyslexia from kindergarten to high school—and ultimately to college.

“Although Billy was a very healthy and inquisitive child, he was behind with some of his early language and speech skills,” shared Deanna, now Wilson’s Vice President of Curriculum and Professional Learning. “During kindergarten, he struggled with learning the alphabetic principle as well as the expected foundational reading and writing skills. By the end of the first quarter of first grade, it was clear Billy wasn’t learning to read and spell. He began to display self-esteem issues, challenges with learning in the classroom, and frustration with homework.”

At that point, Deanna requested an evaluation, which led to the identification of a specific learning disability, the development of an Individualized Education Program (IEP), and delivery of reading and writing services in school. Specifically, Billy began targeted Fundations® instruction at the end of first grade in a private tutoring setting with Robin Carlo, a Wilson® Credentialed Trainer (W.C.T.) and Wilson® Dyslexia Therapist (W.D.T.).

“He needed work on the initial phonemic awareness, alphabetics, and handwriting skills that the Fundations program addresses in an explicit, engaging, and multisensory way,” Deanna explained.

In second grade, Billy transitioned to Wilson Reading System® (WRS) instruction, which was delivered during the school day, along with some private tutoring. These interventions helped, although his progress was initially slow while implementation issues were being addressed. In fourth grade, Billy really started to flourish due to the skillful instruction of his WRS Certified Teacher. Billy’s WRS instruction began in earnest in fourth grade. The following year, he was officially diagnosed with dyslexia by Dr. Florence Lai and her team at Massachusetts General Hospital’s Learning Disorders Unit.

“I felt I owed it to Billy to pursue that specific diagnosis of dyslexia,” Deanna explained. “He deserved to know what it was called, to accept it, learn about it, and ultimately embrace it. Since then, we’ve talked very openly about dyslexia, what it means, what it doesn’t mean. Billy displays so many of the strengths we often see in others with dyslexia—athletic ability, leadership skills, creative problem solving, and emotional intelligence. I’ve always told Billy that report cards don’t provide grades on the things he’s good at. If they did, he would have always been a straight A student.”

Athletics were an important part of growing up for Billy. According to Deanna, playing sports like baseball, soccer, and basketball allowed him the opportunity to be on the same level with his peers—something he didn’t always feel was possible in the classroom. By high school, Billy focused on basketball as a primary sport and was one of the captains of the team during his senior year. He also participated in an Amateur Athletic Union (AAU) basketball program from elementary school through his senior year of high school.

“I once had someone tell me that if my child was struggling with class or homework, perhaps he shouldn’t go to basketball practice. The truth is, we should think about this in the exact opposite way,” Deanna said. “Whether it was sports or another hobby or interest, making sure my child with dyslexia felt successful and good about himself was a top priority. Students like Billy need to experience situations where they aren’t failing. They need to know that they’re talented and have strengths just like everybody else.”

During Billy’s junior and senior years of high school, both mother and son turned their thoughts to college and career.

“I knew a smaller college would be better for me because having fewer students per class makes it easier to form connections with teachers,” Billy explained.

“We both had to be realistic about which schools he should apply to. But more than that, we were most interested in him being on a campus that was supportive of students needing more than the ‘typical’ accommodations covered under the Americans with Disabilities Act (ADA),” Deanna said. “As a parent, I was focused on ensuring Billy could be successful in a college or university setting. I wanted him to attend a school that offers student-focused and individualized academic support, and I felt he would do well at a smaller-sized school.”

Deanna read everything she could to help Billy find a school that would work best for him, including the International Dyslexia Association’s resource, Transitioning from High School to College: Help for Students with Learning Disabilities.

“If your child is interested in going to college, my advice is to be optimistic about it, even if they have struggled with learning and school environments in the past. There are higher education settings that can be the right fit for your young adult learner.”

The process led Deanna and Billy to Curry College near Boston, where Billy is currently a junior majoring in criminal justice. They both liked it for its small size, attentive advisors, and supportive Program for Advancement of Learning (PAL), which provides academically focused assistance to students with learning disabilities.

“The PAL program was a key factor in my decision to attend Curry College. The extra support kept me focused and provided me with a place to go if I had questions or needed help resolving problems,” Billy shared.

“In the beginning, it was important to have the PAL program to help Billy transition from high school to college and to establish good habits while learning what it means to be a successful college student,” Deanna said. “Over time, he has needed fewer of the supports and that’s the point. In fact, Billy made the Dean’s List during his sophomore year. This was a very proud moment!”